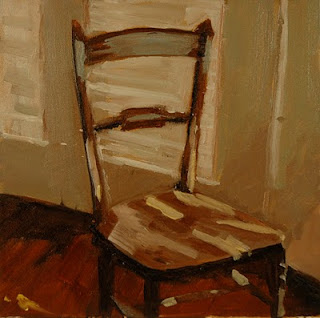 6x6 Oil on Ampersand Gessobord
What idiot chose "chair" as a challenge on the Some Texas Artists Like to Paint site? ......... Oh, that would be me! What was I thinking? This was not easy, so I guess it definitely was a challenge for me. Despite the fact that it was a struggle and there were two wipe outs, it was really good to be painting again after a fantastic holiday. Click on the link above to see some really good chairs.
After the wipe outs I thought about posting this clever joke with a blank canvas. I can leave the blank canvas, but laughter is always welcome!

An eccentric philosophy professor gave a one question final exam after a semester dealing with a broad array of topics. The class was already seated and ready to go when the professor picked up his chair, plopped it on his desk and wrote on the board: "Using everything we have learned this semester, prove that this chair does not exist."

Fingers flew, erasers erased, notebooks were filled in furious fashion. Some students wrote over 30 pages in one hour attempting to refute the existence of the chair. One member of the class however, was up and finished in less than a minute.

Weeks later when the grades were posted, the rest of the group wondered how he could have gotten an A when he had barely written anything at all. His answer consisted of two words: "What chair?"

Thank you for taking the time to view my blog and leaving a comment! I read and appreciate each and every one!!

Any questions or just to say "hi!" just email me! 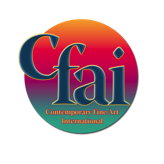 So Many Great Blogs! So Little Space!